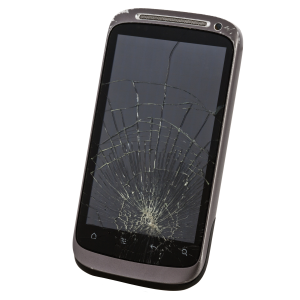 A cracked cell phone screen is not a good thing. I don’t even know how or when it happened. One day I just noticed that my screen was cracked, but since it was still working fine, the busy American cell phone lifestyle just kept right on going. (The above screen is not my cracked screen. This is just an example I found. Mine was barely cracked.) Then one day I noticed the touch pad feature would not always respond. So, just touch it two or three times until it does respond and you just keep right on going. Then one day, it repeatedly refused to respond, interfering with business as usual, and that got my attention. Something had to be done. A new phone was needed. I had things just like I wanted them on the old phone, and getting started with a new phone is a little different. I am still in the process of getting things restored and back in order from the transfer from the old phone to the new.

A crack in the surface of the earth is known as a fault. A fault that develops in the earth’s surface damages and disrupts roads, buildings, utilities, and life in general. It might start small and insignificant then grow into a major disruptive force. Like the surface of the earth, life happens and takes it’s toll. We can become “cracked” and develop a “fault” in our life. It might not seem to be much at the time and life goes on, but damage is done, repercussions are sure to occur if it is not dealt with.

Often this is associated with sickness. The Bible, in a statement of being healed of sickness, in conjunction with the prayer of faith, says to confess your faults one to another, and pray one for another, that you may be healed (James 5: 14-16). Hurts, slights, injustices, abuse, and on and on it can go to enumerate the blows life can deliver, all leave injuries, cracks, faults in our lives. These interfere with communication and weaken us with open doors for foreign stuff to enter.

Jesus paid the price for us to be made whole. We can stop and recognize the faults, lay them open to deal with them by confessing them, and call on the name of the Lord for deliverance and healing. Part of being healed of sickness is closing the open door through which it entered. With this, God will repair and restore you good as new for good communication with him and with others.