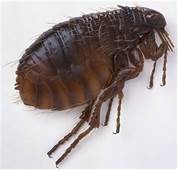 I had heard about a simple flea trap some years ago, and when I heard about it, I said to myself, “Uh huh, yeah, sure it works.” I was skeptical to say the least. It was not until I ran into a situation in which I was inundated with fleas, picking off fleas everywhere I went, that I got serious about finding out all the control measures that were available. In that process I ran across the simple flea trap again. You take a white plate, float one of those battery operated tea lights in the middle of it with some water in the plate, mix in a little dishwashing liquid, and set it in the middle of the floor. It is said that the fleas are attracted to the light, and when they jump toward it, they land in the water and drown. Well, I tried it and it works! I set a trap in one location and the first night I caught about 70 fleas. The next night I netted about 50. Between that and the poison I sprayed, and the diatomaceous earth that I used, the fleas were brought under control. In a few days there were no fleas in the plates and no fleas got on me in that location. I was skeptical until I put forth an honest effort to give it every opportunity to work, and work it did, and that very well.

Sometimes there are things of God of which we are skeptical for one reason or another. Some religious things deserve skepticism, but anything that is written in the Word of God deserves an honest, open-hearted investigation. If it is in the Word, if it is a provision of God, then it is there for our good and his glory. Just because there is something out of the realm of our experience, does not mean it is not of God. Just because there is abuse and misuse of some of the things of God does not mean those things are not good. People misuse cars every day, but cars are still good. We are each responsible to use them in a responsible way.