We were late in the night getting home from church. The boys, Waylon and Willy, needed to go on their walk. As soon as I saw them bristle with intense alertness, I knew they were hot on the trail of something. Quickly they out distanced me and ran behind a row of bushes toward the woods. By the time I broke through the bushes, I did not know which way they went, so I started toward the woods. I happened to look back and saw them behind me, zeroed in on something under one bush. Just as I approached them with the 12 volt light I realized what it was, and at that moment I saw that I was two seconds too late as I saw Waylon jump back after getting hit in the face with skunk spray. He quickly left the scene and ran to the middle of the yard, with the odor filling the atmosphere. 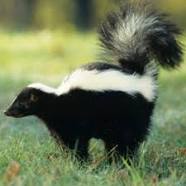 I did not reject and throw Waylon away. I loved him enough to bring him close and clean him up, and not leave him in what his curiosity had gotten him into. Sometimes we get involved in stuff in life that leaves us smelling like a skunk spiritually. There is nothing good about it, even though we can justify it in our own mind. Then, we become ensnared in a wayward way of thinking, speaking, or acting, and with that, we live a life under condemnation, with no real inward joy or freedom. The good news is that by turning from that way to Jesus, we can be cleansed by faith in his blood and filled and empowered by his Spirit to live in the fragrance of his presence each day. His peace and joy can fill our life. Even though we might have to deal with the odor of our “skunk life”, as we give ourselves to Jesus to live in his presence, the skunk odor wears away as we walk in the cleansing of his blood and in the power of his Spirit. And, when we come to Jesus, he puts the royal robe of his righteousness on us and a ring on our finger indicating our rights and inheritance as a part of the family of God to rule and reign with him in life. You don’t have to live the rest of your life smelling like a skunk spiritually! There is cleansing through Jesus! There is a new life for you! A new way! A new realm of power! Truly, through Jesus, God brings us from reeking with the smell of a skunk to reigning with him in life!

24 thoughts on “From Reeking to Reigning”