All through the ages, God has exalted those who humble themselves before him, trusting in him. God exalted Abraham, promising unlimited fruitfulness to both him and his seed, who are those of faith. Joseph was exalted from the prison to the palace, becoming the vessel through which God delivered his family (Israel) in a time of famine. David was exalted from an insignificant shepherd boy to being the king of Israel in a time that strong, godly leadership was sorely needed to fend off the enemies. Jesus, James, and Peter all tell us that those who humble themselves under God’s hand will be exalted (Matthew 23: 12; James 4: 10; 1 Peter 5: 6).

In my high school basketball days, in order to stop the highest scorer on the opposing team in a tournament game, the coach put me on him man-to-man the whole game. I was to stay in his face and keep him from scoring. 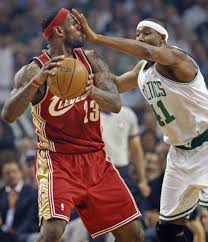 I managed to hold him down to 12 points that game instead of his normal 30 points. I was trying to stop him from being “fruitful.”

Saul, the persecutor, met Jesus and became Paul, the preacher of Christ. He had an abundance of revelations including, no doubt, a revelation of the unlimited fruitfulness promised to Abraham and his seed of faith. It was evident to everybody that this boy was going to score high in souls won to Jesus. Satan saw this too, so he sent one of his boys to play him man-to-man, to be a thorn in his flesh, lest he, like Abraham, Joseph, David, and countless others, should be exalted with abundant fruitfulness. Problem for Satan was, that while Paul was asking God to get this guy out of his face, God gave him a revelation of his all sufficient grace, and Paul learned to draw on that grace so that Satan could not stop him from scoring (2 Corinthians 12: 1-10 KJV). In fact, Paul lived to be an old man (Philemon vs. 9), and shortly before his departure he told Timothy that God delivered him out of all persecutions and afflictions (2 Timothy 3: 11); and, Paul is still being exalted through his abundance of revelations, still winning multitudes to Jesus through his writings, with the unlimited fruitfulness promised to Abraham. Lesson: By learning how to draw on God’s all sufficient grace, every opponent can be overcome in order to keep scoring and win the game. 4-17-15