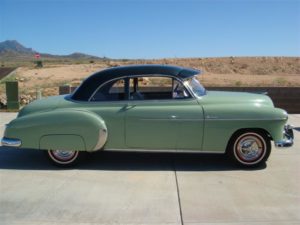 The year was about 1969. My Uncle had heard that I needed wheels in college in order to do some youth ministry in a neighboring town. He gave me his old fishing car that had been sitting up doing nothing. It was a 1950 green two door Chevy Coup with a black top. You could see the ground through the floor board. I improvised a piece of clothes hanger wire bent and hooked into where the lock knob was supposed to be in order to hold the door closed. When it wouldn’t start I always parked it on a slight incline so by pushing it a few feet, it would kick right in. It had a few deficiencies, but it ran. That’s what counted.

One night a buddy and I was coming back to Arkadelphia from a youth meeting in northwestern Arkansas. We were on that hilly, curvy road, going down a hill when suddenly my lights went out. I was right in the curve of the road when it happened. I remember I instantly memorized the position I had my hands and arms in and locked them into place while I pumped the bleeding brakes to try to stop. At the same instant we both started shouting out “Thank you Jesus for lights!” They did come back on. Did we pull over and stop to see what the problem was? No. We had lights so we kept right on going (college kids). Soon it happened again. Again we had the same reactions. And if I remember right, it happened one more time, and I don’t think the lights ever went off again – ever! My buddy and I talked about how the angels were taking care of us. We were just on-fire for Jesus, and yes, there must have been angels helping out to fix the problem.

Thank God for ministering angels. We will never know this side of eternity how many times they have either prevented or rescued us from dilemma or disaster as we carry on in the service of the Lord. The early church was aware of ministering angels that were dispatched through prayer (Acts 12:5-16), and we need to have the same awareness and expectation today. As we speak forth the word of God in faith into life’s situations, the word says the angels “excel in strength that do his commandments, hearkening unto the voice of his word” (Psalms 103:20). The believer who will pray, speak forth, or praise God in faith what the word of God says, employs the host of heaven to bring about what needs to happen. Wow! God help us to speak forth the word of God and see the power of God manifested to the praise of the name of Jesus!