Saul of Tarsus was going house to house and violently dragging out men and women who were followers of Jesus and having them imprisoned. He was a terrorist to the believers in every sense of the word. He successfully scattered the church in all directions, but they kept preaching the word as they went. One day a Holy Spirit, faith-filled, miracle-working table waiter (not an apostle) named Stephen made a bold indictment to the hearers and gave a strong witness of Jesus to the judging religious “powers that be.” Saul was present. When the hate-filled hearers finished stoning Stephen to death, Saul was taking full responsibility for the murder. 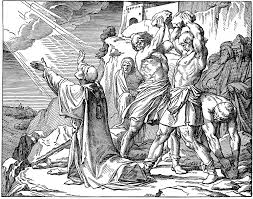 Saul continued to waste the church, but the terrorist had heard the table waiter’s Spirit inspired message, and, before Stephen died, he asked the Lord to forgive the sin of those who murdered him. Those words went into effect.

Saul was on his way to Damascus to get legal authority to bind Christians and bring them to Jerusalem for trial. On that trip, he had a physically blinding encounter with Jesus. For three days Saul could not see, and did not eat nor drink. A “certain disciple” (not an apostle) named Ananias received a vision from the Lord instructing him to go lay hands on Saul to restore his vision. After a short argument with the Lord, he consented to go. He laid his hands on Saul and there was an instant healing with scales falling off Saul’s eyes, plus, Saul received the standard New Testament kick off to a good start by being filled with the Holy Spirit. 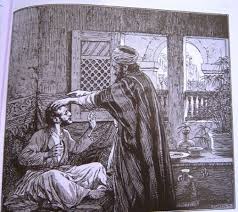 After a few days with the disciples, Saul started boldly preaching Christ in the synagogues that he is the Son of God. Saul became the great Apostle Paul, and the rest is history (Acts 6: 5 — 9: 31).

God uses ordinary people to do extraordinary things when there is obedience to the Word and Spirit of God. Stephen’s testimony continues to live world-wide through the ministry of Paul. Ananias’ brave obedience to go to a murderous terrorist to get him healed and Spirit filled, continues to influence the whole world. Ordinary people, who are Spirit-filled and obedient, are those who change the course of history.