As we all get older, and our steps get slower, it is not a time to quit believing for the best, but to put the pedal to the metal in our faith 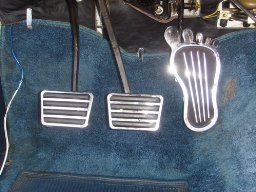 and press on in to the regions beyond. Isn’t it true, as a rule, that when we are sickest, we generally take more medicine and seek more remedy? This principle applies concerning our faith as well.

Rocks, probably the size of a grapefruit and larger, pummeled the Apostle Paul until he lay unconscious without any movement, apparently dead. With that the people drug him out of the city supposing that he was dead. (He would have been an ER case today for sure). However, as he lay on the ground outside the city, the disciples came to him and just stood around him. It did not say they prayed or anything; they just stood around him. As they stood there, Paul got up from lying on the ground and went back into the same city in which he had just been stoned and drug out as dead (Acts 14:19,20). He had a power working in him that went beyond the natural. He had the supernatural Spirit of God residing in him that gave his mortal body supernatural life. Paul told about this power when he wrote to the Romans, saying that if the Spirit of him that raised up Jesus from the dead dwell in you, he that raised up Christ from the dead shall also quicken (give life to) your mortal bodies by his Spirit that dwells in you (Romans 8:11). To arrive at this understanding, Paul had no doubt read Isaiah 40: 29-31 that says that God gives power to the faint; and to them that have no might he increases strength, and they that wait upon the Lord shall renew their strength. He also had probably read Psalms 103:5 saying that God satisfies your mouth with good things so that your youth is renewed like the eagles. Here’s the deal. When the steps get slow and the body hardly goes, that’s the time to increase the dose. Let your faith lay hold on the Word more and more. Think on it, speak it, declare it into your life and your body. You might not be drug out of the city as dead and left there to rot, but whatever you are facing, having the Word operating in your life more and more sure won’t hurt anything, and it can sure help a lot. We all need all the help we can get!

27 thoughts on “Petal to the Metal”