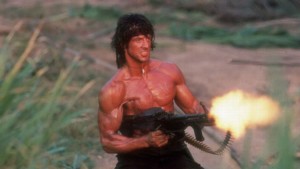 I recently saw the 2008 Rambo movie on TV. The setting is in Burma during the Saffron Revolution. A corrupt State Police and Development Council officer leads an army to pillage villages abducting, raping, torturing, and killing people in a ruthless campaign of fear.

John Rambo is a hardened Viet Nam Green Beret veteran who is peacefully living in Thailand making a meager living capturing and selling snakes and giving boat rides. He is hired to take a group of church people to a Burmese village on a humanitarian mission trip. Rambo killed some pirates on the way to the village who were bent on taking the preacher’s wife. This actually upset the preacher because they had come to save lives, not take them, so once delivered to the village, the preacher sent Rambo away.

The village was raided and the whole missionary group was abducted and the villagers massacred by the corrupt army. The pastor of the missionaries’ church comes and asks Rambo to guide five mercenaries to rescue the missionary team. Rambo takes them to the drop off point, and offers to help in the rescue, but the leader of the group tells him to go away, seeing him as just a boat floating guide not qualified to be a part of such a rescue mission. The team gets in a jamb, being outnumbered by the corrupt army, but Rambo has stayed in the background and in good time single handedly stops the corrupt army’s advance on the team. From that point on, Rambo takes charge and ultimately the missionaries are rescued.

The Church of the Living God is not to peacefully sit by while people are being abducted, raped, tortured, and slaughtered by life and the devil. Through the Word, the Spirit, the name of Jesus, and obedience to God’s guidance, we are to come against the oppressive forces that destroy people’s lives. Every believer in Christ is more than just a boat floating guide. Jesus has done the work so that every believer, through faith in his name, has the ability to deliver the spiritual fire power in the face of life’s oppressions to set any captive free. Every believer can be a spiritual Rambo to bring life and liberty to many, if we will submit to God’s training to that end.