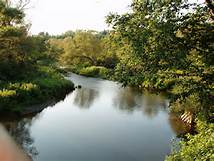 These hot, steamy, summer time days take me back to my old hay hauling days as a kid over at Poyen, Arkansas. A group of us boys would get a long sleeve white shirt on and some leather gloves and load out the trucks with the rectangular shaped bales weighing about 65 pounds each. The thin, sweat-soaked white shirt was a major cooling device as we rode on top of the hay to the barn to stack it away for winter use. However, by the end of the day, we were all ready for a cool dip in the Saline River, just around the bend from the bridge that lies between Poyen and Prattsvillle. For that occasion, not only did the white shirt come off, but also off came the pants, the underwear, the shoes and the socks. Skinny dipping after a hot hay hauling day was about one of the most refreshing things you could ever experience. And of course, us young bucks liked to frolic and whoop and holler and act stupid and silly. Well, one day I decided to act like Tarzan. I swam over to the sandy beach on the other side of the river and got up there with a wide stance and with folded fists beating on my chest I let out the best Tarzan yell I could muster up. All the guys seemed to think that was really funny, so I proceeded to throw my head back and let out another blood-curdling yell to echo down the river. At that moment I realized the guys were not laughing at my antics; they were laughing at the fact that there were two women up on top of the cliff side of the river taking in the whole show. With that I quickly ran and dove head on into the water and swam under water across the river until I was safely hidden behind the log lying in the water on the other side, getting over my shocked embarrassment.

The Bible says there is refreshing from the presence of the Lord (Isaiah 28:12; Acts 3:19). Sometimes people get carried away in their frolic in the spiritual river of God. That’s ok. People sometimes act stupid at ball games and in bars. Bottom line is that those who jump in the river get refreshed. That’s better than being hot, itchy and miserable all the time. It’s good to strip it all off and just jump into the river!