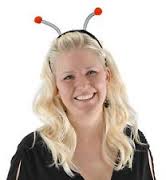 I was staying in Oregon for about a year and I was going to the bank concerning the opening of an account. I did not know anybody in the bank, and nobody knew me. It was my first trip to step inside that building. It was Halloween. As I pushed open one of the double glass entry doors I saw a lady with her back to me dressed in a costume which included a “rabbit ears” style antennae extending up from the hair of her head. At that very same moment, coming clearly from her direction, I heard a cheery greeting, “Hello Jackie.” Instantly it flashed through my mind, “Oh boy, this is spooky! That woman has antennae on and she knows my name – and she has her back to me! How did she do that?” As I bemused the situation for the moment, I then realized that she was talking to a man named Jackie who was approaching her from the other side of the room, and when she greeted him, it was at the same moment that I stepped in the door. We all laughed at the eerie coincidence saying “Now that bank has the edge on being friendly!”

We all enjoy the warmth and friendliness of people who know us and greet us by calling our name. Jesus let us know there would be a day when our name would either be blotted out of the book of life or called out before the Father and the angels. The example was the church at Sardis whose works were not found perfect before God. God told them to repent, to change their mind and their ways, and be watchful, so they would be ready when their time came to stand before him. They were assured that if they would overcome in this manner, their name would not be blotted out and their name would be confessed before all as being God’s own (Revelation 3:5). As our faith lays hold on the perfect work of Jesus on our behalf, that he died, rose again, and is alive today to impart his Spirit into and upon us, then we can realize the power of God to do those things that we are called to do. It is by faith in Jesus and by following the Holy Spirit that we can overcome obstacles. It is by faith in Jesus and by following the Holy Spirit that we will hear our name called as God greets us in that day, and it won’t just be a spooky coincidence!