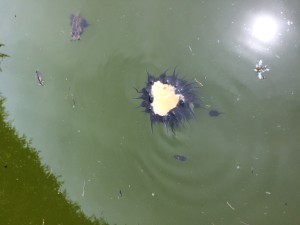 Now is the time of the tadpoles. They like to hang out around the edge of our little ornamental goldfish pond apparently feeding on the organic growth on the pond wall. It won’t be long before these little fellas will be hopping out of the water to make their frogly melody, particularly when it rains. 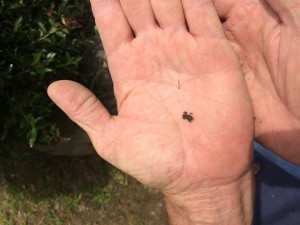 With some old hamburger buns left over from a family function, we have discovered that these little wiggle tails like bread. Chunks thrown in the pond are immediately surrounded by the little black swimmers. It is interesting to watch them as they seem to work together to escort the piece of floating bread toward the edge of the pond. I guess the edge of the pond is their official feeding ground.

There are many examples in nature of groups working together to accomplish a common goal, so much more does that work in the kingdom of God. Jesus gave his disciples a principle of operation that absolutely took the limits off what could be accomplished if we are unified together with his presence. He said if any two of you agree on earth, here and now, as touching anything that they shall ask, it shall be done for them of my Father which is in heaven. Then he explained where two or three are gathered together in his name, he is there in the midst of them (Matthew 18:18-20).

Unity is a choice we make. When we cut through all the peripheral issues and discover the heart and goals of God to see people the way God sees them, and we unite to accomplish those goals, the presence and power of God is there to get it done. The early church, as recorded in the book of Acts, is a good example of what can be accomplished. As they were united in obedience to God’s promises and God’s heart, the supernatural presence of God was poured out and was present to do a supernatural work in the lives of people all around.

It was not business as usual. It was a “new thing”, a God thing, in which the sacrifice and resurrection of Jesus Christ became a living reality in the everyday lives of all nations and classes of people with healing, life-changing power. People, pulling together to accomplish God’s heart toward people, is endorsed by God’s presence. A big lesson from the little tadpoles.