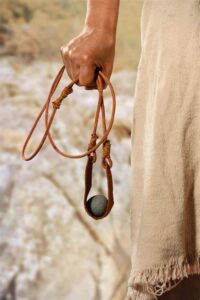 God’s people were trembling with fear in the face of the giant spokesman of the Philistines, Goliath. In the circles of war and political persuasion, David was a nobody, but he had already proven the power of his God with the lion and the bear. When he learned the threat of ungodly dominion that God’s people were facing, he confidently stepped up to the plate to reverse the situation. At first he assessed the normal mode of warfare, but quickly determined that would not work. He chose to go with what he knew would work in his hands – a sling and a stone. With that, and with his confidence in God, he squared off to the giant and declared unto him the way it was going to be. The giant mockingly despised him, but what the giant did not know was that he was actually mocking and despising God – when you have done it to the least of these my brethren, you have done it unto me. That pride and insurrection to the ways of God was the downfall of the giant. David sank one smooth stone right into the forehead of the giant, toppling him to the ground. Then David took the giants own sword and took his head off to be carried around and displayed for all to see.

The United States was established to be a light of the world, to get the gospel out to all nations. Has there been faults and abuse and corruption? Yes, and God deals with that. Has there been good things happen and millions of lives changed? Yes. Do we face a Goliath that is threatening to completely undermine all that is godly? Yes. Is this Goliath going about to establish an ungodly dominion over God’s people and all that is good according to God’s standards? Yes. But God is bigger than all the counsel of the wicked. We, as God’s people, must take our place together as a David, and place our confidence in God alone, and put our hands to one smooth stone of the Word and send it straight to the forehead of the giant. That Word is Psalms 33:10-12: “The Lord bringeth the counsel of the heathen to nought: he maketh the devices of the people of none effect. The counsel of the Lord standeth forever, the thoughts of his heart to all generations. Blessed is the nation whose God is the Lord.”

We must do this for ourselves and for generations to come. Will you join together and pray this Word into our nation for God’s counsel to be released to operate and accomplish that which he desires to be accomplished? Apathy allows ungodly oppression. Believing prayer leads to godly liberation. Do we want the supernatural hand of God to change our lives and our nation for the good, or do we want to sit by and let it be swallowed up by the slime of ungodliness? No! Take the sling and the stone and let’s take this nation back for God.