On any given day, you can sit at an intersection in your vehicle waiting for the light to change, and as the cars pass before you turning into the lane beside you, you can know, every person is there because they have a destination. And, everybody is generally busy tending to daily matters as they go. Many times I have counted at least half the people holding a cell phone to their ear as they pass before me. Everybody is busy while they are going somewhere every day. Everybody has a destination. 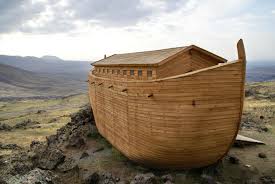 Everybody had a busy destination in the days of Noah. Jesus knew the flood actually happened, so he taught that people in Noah’s day were busy carrying on with daily life and did not stop to really realize that their destination was not good (Matthew 24:37). They ignored all the signals. First, Noah built a 450 foot long boat in the middle of nowhere. That would have at least gotten some tongue-in-cheek comments on the six o’clock news, and maybe even a special segment on 60 Minutes. And then, Noah was a 500 year old man who preached to the people that righteousness was a requirement to escape the impending judgment. He was ignored. Only eight people were saved out of the whole wicked generation. Unbelievable! Everybody was too busy doing their own thing to stop and really listen and make the necessary changes in their lives. The animals loaded up two-by-two, the rains came, and the boat began to float. Noah found grace in the sight of the Lord and walked with God, so he and his family survived the judgment (Genesis 6).

Life is busy with a flood of activity. We need to stop and realize the boat has been built. Jesus died, rose again, and lives today so that we do not have to die in sin with a destination of being apart from God forever. That’s hell! He gave his righteous life as the blood sacrifice that takes your sin away and enables you to walk with God in God’s grace with no clouds in between. By faith, you can get on board that boat and with joyful confidence you can know that in the face of death itself, by the righteousness of Jesus alone, your boat will float and never sink. Destination: Heaven. That is a good destination!