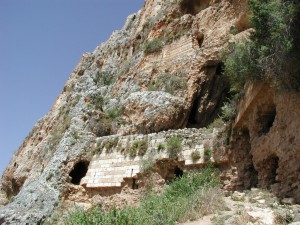 Jonathan, Saul’s son, seeing the situation, decided to do something about it. He was of a spirit of faith. No doubt he got to thinking how the Israelites were God’s chosen people with God’s promises, with a history of God working in a supernatural way on their behalf, and here they are scared stiff because all the cards are stacked against them. He thought, It’s time for God to move, and for God to move means that we must get moving. So he told his armour bearer that they, just he and his armour bearer, were going to go after the Philistines because “there is no restraint to the Lord to save by many or by few” (1 Samuel 14:6). When the Philistines saw them and invited them to come on over, Jonathan knew the Lord had given it to them to whip the Philistines. They killed about 20 of them and the people started trembling, and the Lord caused the earth to tremble, and the Philistines killed themselves trying to get away. The Israelites who were hidden came out and the Israelites who were mixed in with the Philistines came out and by everybody pulling together with the power of God, the Lord saved the Israelites in battle.

Here is the lesson: We have a supernatural enemy and we are surrounded by events of life that seem impossible to overcome and are hell-bent to destroy us. If we just crawl in a hole and hide and allow life and others to control us we will never be free. But if we will rise up with faith in the word of Jesus Christ through the power of his Spirit, we can hit life and the devil head on and get the victory in a supernatural way. Take the spirit of faith as Jonathan and begin smiting the impossibilities before you to live a victorious life by the power of God. 1 Samuel 13– 14:23