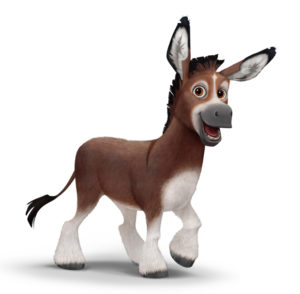 One of the most inspirational animated movies I have enjoyed is “The Star”. It has to do with the birth of Jesus Christ from the perspective of a little donkey named Bo. He is a little donkey whose lot in life is to grind grain by going round and round at a grinding wheel. But he has a heart’s desire to be one of those to pull the king’s carriage of that country. The older donkey, who is walking the grind stone with him, tells him that his dream is impossible, but the old donkey does what he can for the young hee haw to have his freedom. The old donkey is successful in getting the youngster free, and from that point on, one adventure follows another. First, the pursuit of his owner to get him back into captivity is one thing, then, he is up against an evil force that seeks to stop and destroy anything that gets in the way of its evil intent, including what the little donkey is all about. Ultimately, through many tests and trials, the young dreamer has his dream fulfilled, not in the way he thought, but in a way much greater than he ever expected.

There are two lessons in the movie that really touches me. First, it does not hurt a thing to dream big. Joseph had a big dream, and he had to go through some stuff, but his dream came to pass. Sometimes we need to let ourselves just dream “out of the box.” It’s a “shoot for the stars and if you miss and just hit the moon” thing. Hitting the moon is pretty good. That’s better than just hitting the top of a tree. But the second lesson is the greater lesson to me. Anyone who desires, can be a part of the entourage of the King of kings and Lord of lords, including the dogs who were part of the force to destroy him (you gotta see the movie to know about that).

The King of kings came in the humility of being born in a barn to embrace everybody from the most lowly, insignificant person on earth, and the most evil person on earth, to the highest and the mightiest person on earth with forgiveness and a place in his kingdom. For that, all bow down and worship him. He is not just a religious teaching and philosophy concocted by some man. He came from the heart of God for the good of all. He is a living person who was actually born in a barn. For what he did to honor his Father, there is no person who will not bow down and do him obeisance, one way or another. The Father will have honor given to him by every person. Every animal and person in the barn bows to him for who he is. With joy and gratitude I willfully bow to him for who he is and for what he has done. Thank you Lord Jesus.