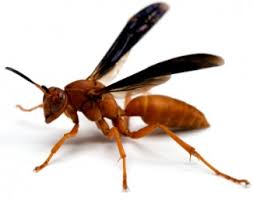 As a young boy living on the farm, I was around wasps and wasp nests a lot. It was kind of a sport for me to take a slender stick about two inches wide, about a quarter of an inch thick, and about two feet long, and go stir up a wasp nest. When the wasps would start flying around, the idea was to use the slender paddle to swat the wasps and kill them. If I killed one, that was a point for me. If I was stung by one, that was a point for them. The object was to stir them up just enough to make a few of them fly around so I could swat them until the whole nest was wiped out. It was a sport that would get the adrenalin flowing and greatly exercise ones quick reactions. Now days I still enjoy a little rumble with these winged stingers. Just today, at this writing, of three wasps that I needed to deal with in a work situation, one stung me, I killed one, and the other one left. So the game was tied. I have never heard of killing wasps to be a national sport, but for a kid on the farm looking for some high level excitement, it filled the bill.

Playing with wasps is one thing, but there is a stinger that you don’t want to play with, and that is the sting of death. “The sting of death is sin…” (1 Corinthians 16:56). If you have not committed your life and your eternity to Jesus Christ, trusting what he has done for you to be sufficient preparation for you to meet God in eternity, then you are playing with a wasp whose sting can take you out forever. You don’t want to spend eternity separated from God in hell. Whether you believe in hell or not, when you slip into eternity, you will find out the reality of what Jesus believed and taught. He believed in hell and he taught the reality of it, and, he taught us all — be prepared! Don’t play with the wasp of death. Do business with the Lord. Turn from your way of thinking and receive what he did for you for yourself. Then you can say with the apostle: “O death, where is thy sting? O grave, where is thy victory…But thanks be unto God, which giveth us the victory through our Lord Jesus Christ” (1 Corinthians 15:55,57). Through faith in Jesus, death is stinger-less!