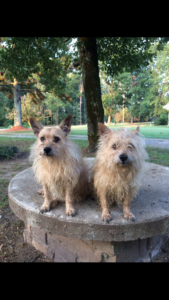 Waylon and Willy, my two little furry canine friends, generally get a walk every morning and every evening, sometimes early and sometimes late. They don’t like rain and storms, so on those days they prefer to just stay in their quarters. But with the normal daily interaction, I have opportunity to drop a word on them, lead them into a specific action, and offer a reward with successful completion of that action. This, repeated on a daily basis, quickly brings an association in their mind which trains them to those specific words. At the command “Inside!” they have learned if they run into their pen they will have a delicious glucosamine jerky treat that they love. To train them for that, I first led them through the motions the first few times, repeating the word “inside” to them, and when the action was completed they received the reward. I did the same thing with the word “bench”, leading them to jump up on the wooden bench in the yard, except the treat for bench was simply a barrage of petting, hugging, and saying “good boy”. On a good day, I can be walking them in the yard, and by getting their attention and giving them a good enthusiastic “inside” they will run into their pen and dance around and squeal a little bit eagerly awaiting their treat. It’s the same with “bench”, and I always reward them with some good “lovin’”. The other day I was with a friend in the yard and I had the dogs out. I gave them the “bench” command and they quickly ran over to the bench and jumped up on it excitedly. I petted them generously. In a couple of minutes I got their attention and spoke the “inside” word. Instantly they both simultaneously ran into their pen as fast as they could go. The friend was impressed and I was proud of them.

As we spend time with our heavenly Father and allow him to lead us by his Word into specific actions repeatedly to receive the reward of those actions, we learn that his Word is alive and really works. We learn that his Word can be trusted. Jesus is that living Word. As we walk with Jesus in this way, we grow in grace and faith, and we receive the reward of his power manifesting in our lives. It takes some commitment, some following his leadership, and some repetition, but the rewards are worth it. As we are trained in this way, we become excited to “run with the Word” because we know the reward is sure. Not only is there great peace and joy in this response, but we can know the Father is very proud for all to see the reward of his goodness in the lives of those who will walk with him in harmony with his Word.